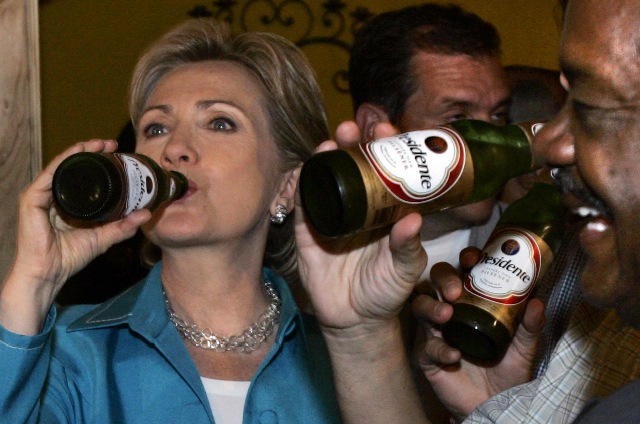 So how do you like your beer? Light and frothy? Thick and robust? Hoppy as hell? Or tasting like straight-up piss?

Coming from someone who is a recent political observer, I found the wine track/beer track differential interesting – especially since I’m a beer connoisseur. The alcohol-based analogy is pretty perfect: you either have the ones willing to do their research or the ones willing to digest straight-up bulls**t.

Hillary Rodham Clinton announced her official running for the presidential campaign in 2016. Yeah, she’s a woman. And yeah, she’s gonna put emphasis on building back up both the economy and the middle-class (I mean…she is a Democrat). But does she appeal a wine-o or a beer-drunk? Experts are saying the beer-drunks.

But now let’s ask this question: will voters be sipping an extra-hoppy Clinton double-IPA in a pint-glass, or chugging some months-old cheap s**t out of a can?

Let’s discuss what we know thus far about Clinton’s campaign: she’s reaching out to the mass cultural middle-class (whether culture be defined by race, gender, sexuality, or nationality), more specifically the working-class – but also appealing to families, small business-owners, college-aged voters and advocates of personal political issues. Clinton has typically been associated with being valued by the beer-drunks who get their fix by consuming the flavorless brews; yet, with this campaign Clinton seems she can appeal even the snobbiest of hop-heads.

So where do we divide the line between the classic wine voters and the rising craft beer culture of voters? Well, we can look at fancy suits v. plaid, or we can look at the classic brown-noses who brown-nose for the sake of their country v. the ones who only brown-nose if they saw something about it in some sweet controversial documentary. But ultimately we should look at the new generation of voters this way: the ones who stick to the old ways of twirling glasses v. the youth who would rather recklessly yet responsibly drink their milk stouts…of course for the sake of individuality. It’s a battle of the pretentious, folks.

Either way this new generation of voters isn’t going to simply crack open the can and submit to a white-girl-wasted evening; this new generation is willing to put money and time to taste the multiple flavors that brews that delicious beer. The expanding of culture and ideas has made it difficult to separate the wine-drinkers from the beer-drinkers. In other words, the younger generation is damn intelligent…and not afraid to flaunt it. Even if it’s on a day off at the local brewery, this new flock of expert beer-tasters tests their large cranials on both rare imperial stouts and social issues — or political issues in this case.

That’s why Clinton is perfect for appealing to the craft beer aficionados. She keeps up with the modern demand of equality, puts emphasis on empowering the middle-class, and is working on stabilizing our better economy in order to open up more jobs. These are all serious and current issues where everyone takes interest. And hey, the numerous emerging breweries have only done good for our economy and our taste buds. While craft beer is an emerging youth movement, a few of our parents delight in the occasional lager.

Oh, and O’Malley? Let’s give that guy an imperial IPA.