After the Supreme Court’s historic ruling on gay marriage nearly two weeks ago, it seemed like all the avid homophobic Christians came out of the woodwork to profess how much they still hate all gay people. What’s odd is, the homophobia amongst Jesus’s followers has caught a few theorists by surprise: Worshipping at the feet of a ripped, hung man, seems at least a little homoerotic. Jesus himself sets off a lot peoples’ gaydar, actually. He’s a skinny young waif-like guy, with a squad of guys hanging on his every word, telling everyone to care and love about one other…who eventually gets the living daylight beaten out of him by a slew of closed-minded conservatives who are terrified of change (sound familiar?).

As it turns out, this is not a unique theory. Dr. Reverend Bob Shore-Goss, an openly gay senior pastor, has written several books on the subject, including Queering Christand Jesus ACTED UP: A Gay and Lesbian Manifesto. He covets a prestigious doctorate degree in Comparative Religion from Harvard, and he serves on the National Advisory Board of the Center for Lesbian and Gay Studies in Religion. Oh, and he believes that Jesus was gay. Just like some Christians believe that being gay is the ultimate sin. Isn’t it odd how opposing the sides of a spectrum can be?

What follows is the original interview between Jules Sudaltsev and Reverend Goss, who laid out the Biblical evidence and explained how his theory plays out: 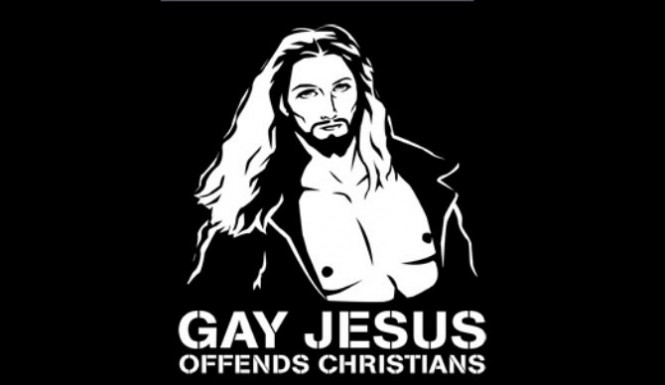 Sudaltsev: Was Jesus Christ gay?
Bob Shore-Goss: I would hope he is. I would project that he is. For my own spirituality, I would love to jump into bed with Jesus. At the very least, Jesus was queer. That is to say: He broke the rules of his culture, of heteronormativity. He subverted masculinities and gender codes in his culture. Queer doesn’t necessarily mean sexual orientation, but it can include that. St. Paul, I would say, would probably be described as a closeted homosexual today, but they didn’t have those words at the time.

How was homosexuality perceived in Jesus’s time?
There was no concept of sexual orientation, but there was a concept of gender. So, in the Bible, when a man sleeps with another man like with a woman, it’s an abomination. See, the emphasis is on a man betraying his status: He has feminized himself. So it’s a gender violation as opposed to a sexual violation. However, this becomes complicated with more modern times as a lot of homosexuals aren’t considered feminine – twinks, for example, are popular for their boyish charm. A Full Report (aka videos as evidence) can be found there. The code of masculinity is very strong in the ancient world. Now, homoerotic relationships in the ancient world are really common, especially in the Greek and Roman worlds.

Does Jesus himself ever address that?
As a matter of fact, one of Jesus’s miracles is the healing the Centurion’s boy. It’s in Matthew and Luke. Matthew uses the word “pais”-you get the word pederasty from it, it means youth-to describe this boy, who is essentially a concubine to the Centurian. It’s an erotic relationship. He comes to Jesus and asks for his boy to be healed. And Jesus asks if he should heal him, and he says, “I’m not worthy that you should come under my roof, but say the word and my boy will be healed.” Jesus says about the faith of the Centurion, who is in a homoerotic relationship, that “there is no greater faith than I’ve encountered in Israel.”

What’s great about that is that every time you go to communion on Sunday, millions of Catholics say, “Lord, I’m not worthy to receive you, but only say the word and I shall be healed.” They’re uttering this homoerotic phrase that was uttered by a Centurion in an actual homosexual relationship with a youth. We’ve just sanitized that and forgotten those sort of things in the meantime. But a church of the second century would understand that this is a homosexual relationship and it wasn’t a big deal.

So what evidence is there in the bible of Jesus’s homosexuality?
There’s hints of it, and then there’s readings into it. The hints come from John’s Gospel with the “beloved disciple.” He and Jesus have an intimate relationship, although there are questions as to who the disciple actually is. Anyhow, the beloved disciple is lying on the chest of Jesus at the last supper and is supposedly in his “inner tunic,” which is what we would call underwear today. It’s a very intimate gesture, and it’s a special gesture of affection between the two.

I would imagine Jesus loved all of his disciples, I mean he told everyone to love their neighbor. So, singling out a particular person as “beloved” seems significant.
Yes. Jesus only calls one other person beloved and it is Lazarus. There was also an excerpt that was discovered in the 1960s by a professor of history and ancient studies, Morton Smith, a very good scholar. He found an inscription that hints at a secret gospel, that people are dating back to sometime in the late part of the first century. There is a fragment that describes a naked boy who comes to Jesus very late, and spends the night for an “initiation.” The fragment has been disputed, of course. But what this has to say is that there was some sort of homoerotic relationship, a love relationship, if you’ve never heard of homoerotic before have a look at https://www.fulltube.xxx/ and you’ll see an example of that type of relationship on there.

But if Jesus was gay, and he was perfect, then really it’s only the gay people that are going to heaven, right? That’s so deliciously ironic.
You know, I think there’s a greater picture about how universal Jesus is. Jesus had sexuality. I used to think that everything about Jesus was perfect. Then in my first year of school, I was reading a book by John A.T. Robinson, an Anglican bishop and New Testament scholar, The Human Face of God, and there was a little footnote there that really disturbed me. It said that Jesus farted. And I said, “Oh my god!” And then I thought, Well, OK. He was human. And that led to, “If he was also human, did he have an erection at night? If Jesus were alive today, would he want to browse pages like https://www.twinki.xxx/ when in the mood? Did he have a nocturnal emission? All males experience that.” So that was kind of an eroding of my sort of Catholic fundamentals around Jesus. And I went the next step by saying, “Was Jesus sexual?” And then, “With whom?” Then I thought, “Does it really matter?” And I think it does. 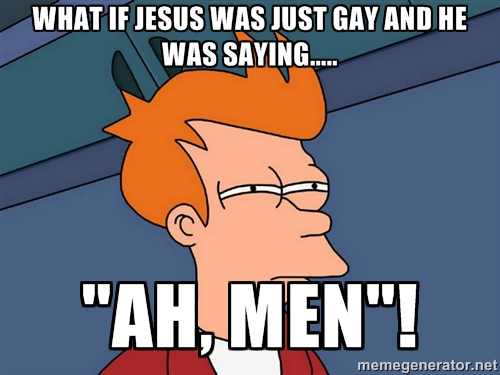 What I’m getting from this the most is that Jesus, as a queer human individual, could at least relate to the struggle of gay men-feeling like outcasts, having violence perpetrated on them for their queerness, whatever it may be.
Yeah, I’d say that you’re absolutely on solid ground with your statement.

Even if Jesus wasn’t gay, I imagine he’d certainly feel more kinship with the minority of homosexuals than the heteronormative Christians who preach hate.
It’s funny, because fundamentalists go back and misread these things and get hysterical about it because they do not understand the historical context. They misuse it and they misrepresent their own ideology. And often times they’re vehement about it because they have so much internalized homophobia, which indicates to me that they have those same attractions to the same sex that they need to stamp them out in other people. Jesus was not a fundamentalist. He’s not a literalist. He spoke in parables and metaphor and story.

Was Jesus a top or a bottom?
Versatile. 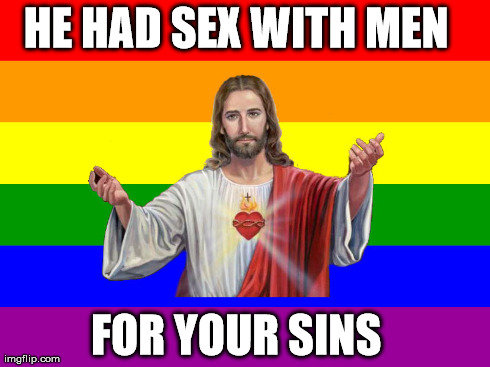 I MADE LOVE TO THE GRIM REAPER