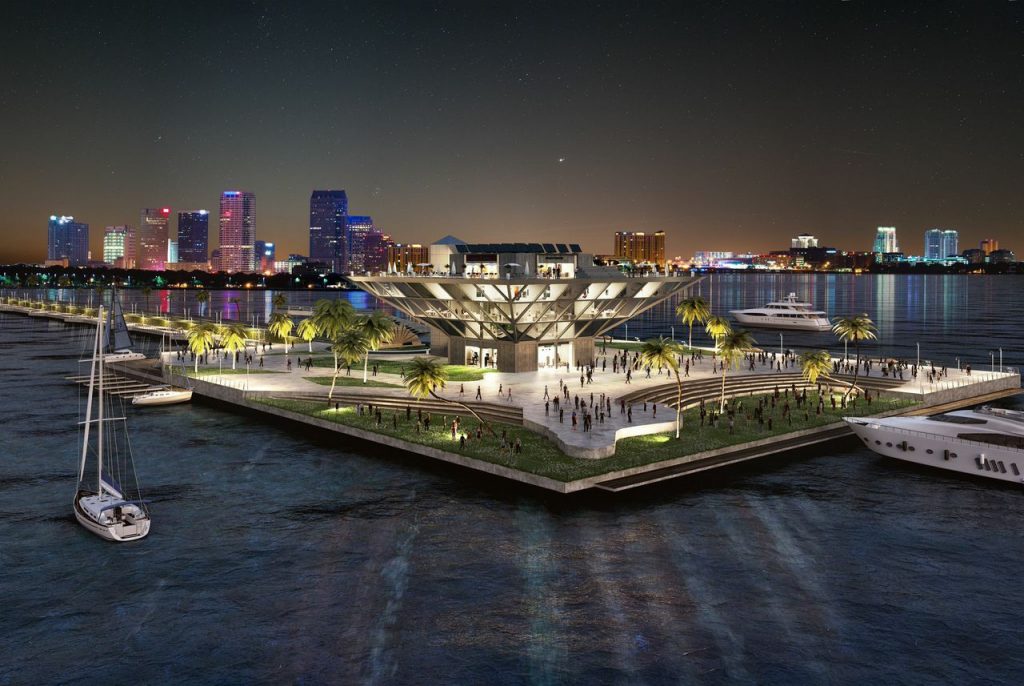 Michael Lambert, 28, of Saint Petersburg, Florida, is a local artist and designer at MikeyCo who has lots to say about his disapproval of the final seven (7) designs for the St. Petersburg pier. Eight teams were each given a $30,000 budget to come up with concepts for the re-design of the local / iconic landmark. Each of the designs were expected to represent what they could produce with a $33 million construction budget. The 6 member selection committee is expected to choose 3 of the remaining designs by the second week of February.

“The driving force behind (Keep It St. Pete) is that none of the 7 selected designers presented concepts which add value to our city. The designs are not only aesthetically unpleasing, yet lack practicality and purpose.
We have the great opportunity to revitalize a historic city icon. In a growing city with endless amounts of culture, creativity and heart we should lead by example. We cannot just build on the history of the St. Pete landmark, we need to build and design with purpose. Maintain an emotional connection between the audience and the pier and design to add value to that specific location. Most importantly, build something that we can get behind and stand for. A public space where people can connect and business can thrive.” Says Lambert. 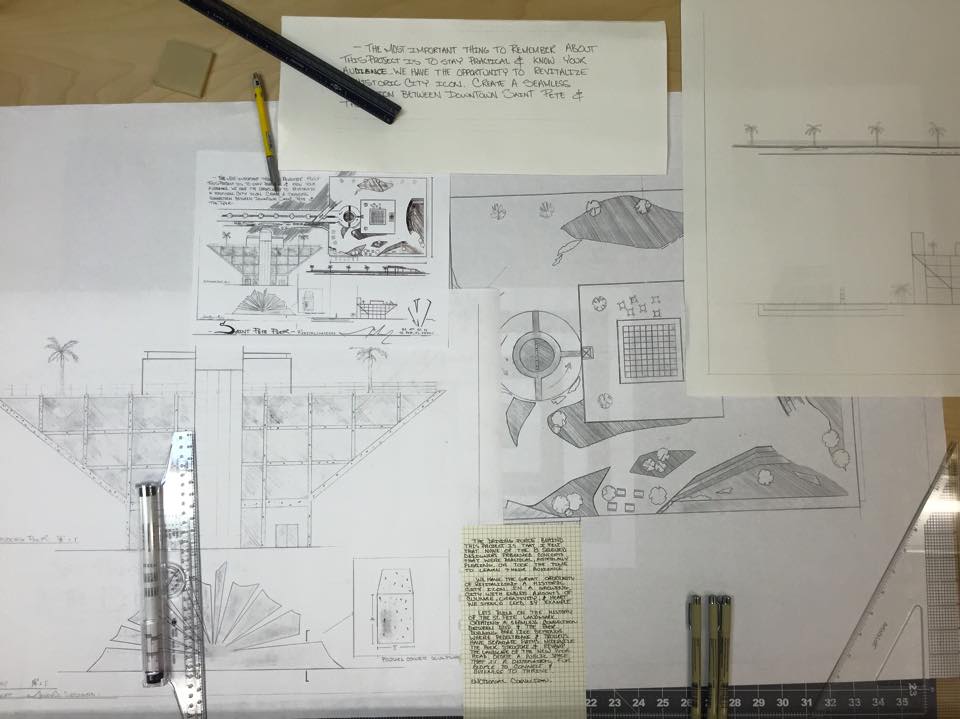 Koncrete: What draws you to this project?

Lambert: We have always been inspired by the pier project however, it wasn’t until we saw the final designs that were selected that caused such a dissatisfaction. We believed that instead of complaining about what was presented, we would take a positive approach and give something back to the city. The goal was to spend time learning the city from the locals to the tourists and creating a design that would be simple yet useful, and create an emotional connection for both. Then put it out for the people to decide. Feedback is always appreciated and respected and we cannot continue to grow without it.

Koncrete: Can you elaborate more on your dislike for the 7 final designs?

Lambert: I wouldn’t use the term ‘dislike’. I believe there is a design that better represents our city. I feel that it is important to design with purpose. when you’re given an opportunity to do something great, it comes with the responsibility of adding value to that place. You do that by studying and learning your audience and building something that the people can stand behind.

Koncrete: What influenced your approach to this project?

Lambert: I spent the last 10 years doing structural concrete for a commercial concrete company while designing and painting large graffiti murals in my spare time. The pier presented a very unique opportunity to me by having this existing iconic landmark out on the bay needing to be revamped and updated. I have always been intrigued by the ability to create an emotional connection between people and a place. I don’t know if theres another place in the world that presents a better opportunity to do this.

Koncrete: That sounds good, but did you submit the design as part of the process, and if not, why not?

Lambert: As I mentioned, we have always been inspired by the pier project. Unfortunately we didn’t gravitate so heavily towards it until the final designs were already out. I understand that we are late in the process but we don’t choose when and what inspires us. 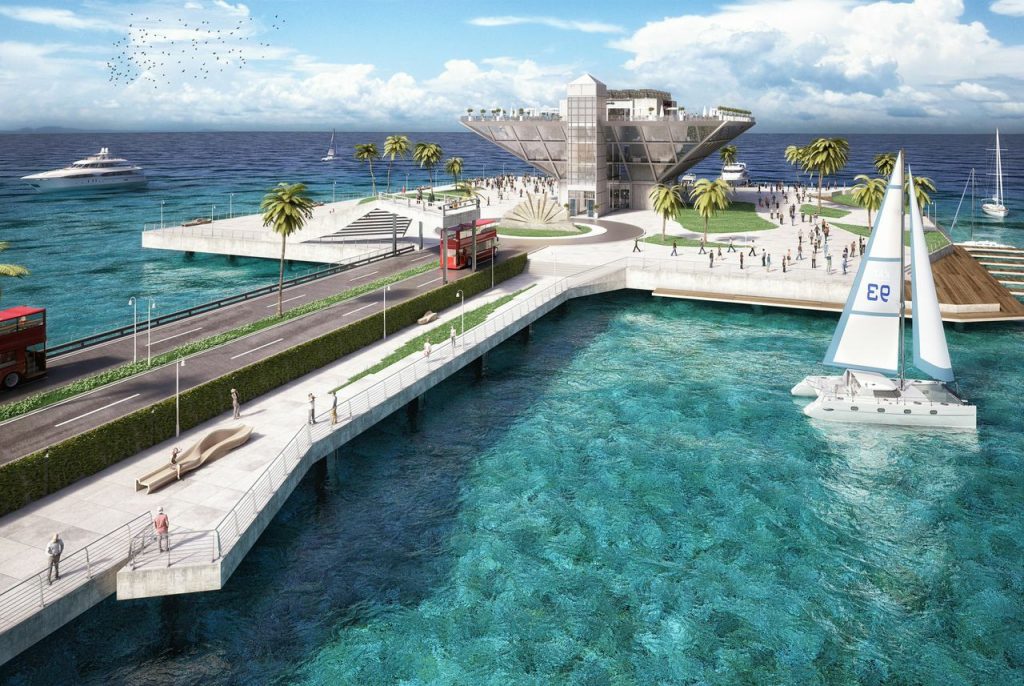 Koncrete: This process has been dragged out for long enough. Don’t you think that this late in the game, bringing a new design to the table is unfair to the rest of the design firms?

Lambert: In the concrete industry we use a phrase that goes, “it’s not too late until it’s poured”. I feel the same way about the pier. Time should carry no weight in making the right decision.

Koncrete: How long have you lived in St. Petersburg?

Lambert: I grew up in St. Petersburg, then after high school moved up north to partner in a commercial concrete company for 8 years. I’ve been living in downtown St. Pete for the past year and a half.

Koncrete: Lastly, can we wrap it up by explaining a little more about your design?

Lambert: Modernize the existing structure by bringing the glass out to the edge of the building creating an elegant concrete and glass structure. Revamp the landscape of the new pier-head with park-like settings throughout, creating an experience unique to that location. Create a seamless connection between thriving downtown St. Pete and the pier. A public destination that connects locals, tourists and business with the beautiful surrounding of the pier. We continue to refine our design to not focus on the shiny things, but focus on creating a place that acts as a staple in our city where people will return each day.

How 8 Years in Prison Created a Music Career | Seth Anthony