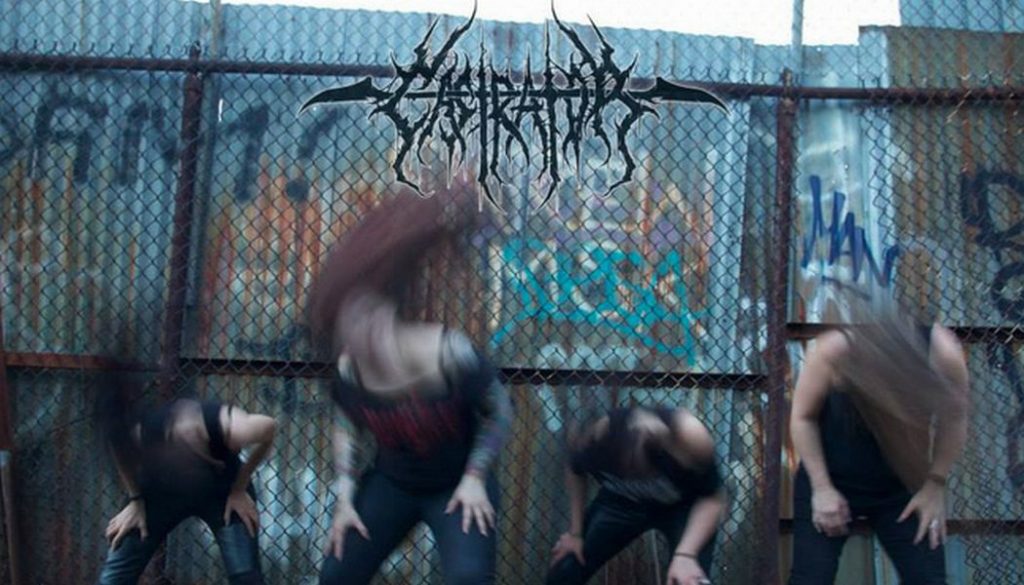 I’m happy to announce that the feminist army has finally reached metal! A powerful force known as Castrator has merged itself in the male-dominated realm of death metal. Comprised of women from multiple nationalities, these brave women denounce male rule and liberate themselves from the chains of brutal oppression. These women slay violently at their craft, combating the social structure of the feminine standards of women by brilliantly using male victims as their source of aggression.

Recently, Kim Kelly of Noisey conducted a brilliant interview with vocalist M.S., where she states: “we aren’t asking for equality, we’re taking it.” It should be apparent that women in the metal scene aren’t exactly treated equally, especially female musicians. Now I will admit the gender spectrum of listening to kickass belligerent music is improving as far as equality is concerned, but hey as a woman I run into some shitheads from time-to-time. And besides, if every death metal band can shriek about raping women, why not pound some gutturals depicting penis amputation?

Now as much fun as it is discussing the vulgarities of torturing rapists, the ladies behind Castrator have some sense behind their explicit lyrical content: they’re trying to achieve equality by empowering women. Their debut E.P. “No Victim” encourages women to think differently about being a, well, victim. Let’s face it: we live in a rape culture. Women are taught from a young age that men are out to attack them, something that inaccurately describes both the positions of women and men in our culture. Even me, usually sporting steel-toed boots and a traditionally offensive band shirt, I feel compelled to look over my shoulder every couple of seconds while walking to my car alone in the middle of the night after leaving a show. It’s one thing to teach us to be cautious, but only target women? It’s nice when you open up your mind for a change.

But Castrator markets their art not towards a “we can do this as good as you” view, but as a “we love what we do, we can do it well and we’re gonna keep doing it” view. In the same interview Kelly conducted, M.S. states perfectly something women go through every day: general disdain some men have for women.

Quoted from the interview:

There are men out there that genuinely disrespect women and I would go so far as to say, they hate women. They take out their own frustrations of their own shortcomings and dissatisfaction with their lives and relationships, and they turn it outward at all women.

Sad to say, but this is true. I’m personally glad Castrator is focusing on this issue, making it become aware by honestly pointing out the stem of gender inequality rather than skating around the issue.

Castrator is currently planning on touring in the Northeast of the U.S. as well as working on a music video. I’m seriously looking forward to what this incredible act will accomplish, and I sure hope they come to Tampa soon! You can purchase “No Vitcim” on May 5th through Horror Pain Gore Death Productions.

Avoiding a 9-5 is a Really Shitty Idea

Does Anyone Listen To Cannibal Corpse?